A Brief History About Farangi Mahal 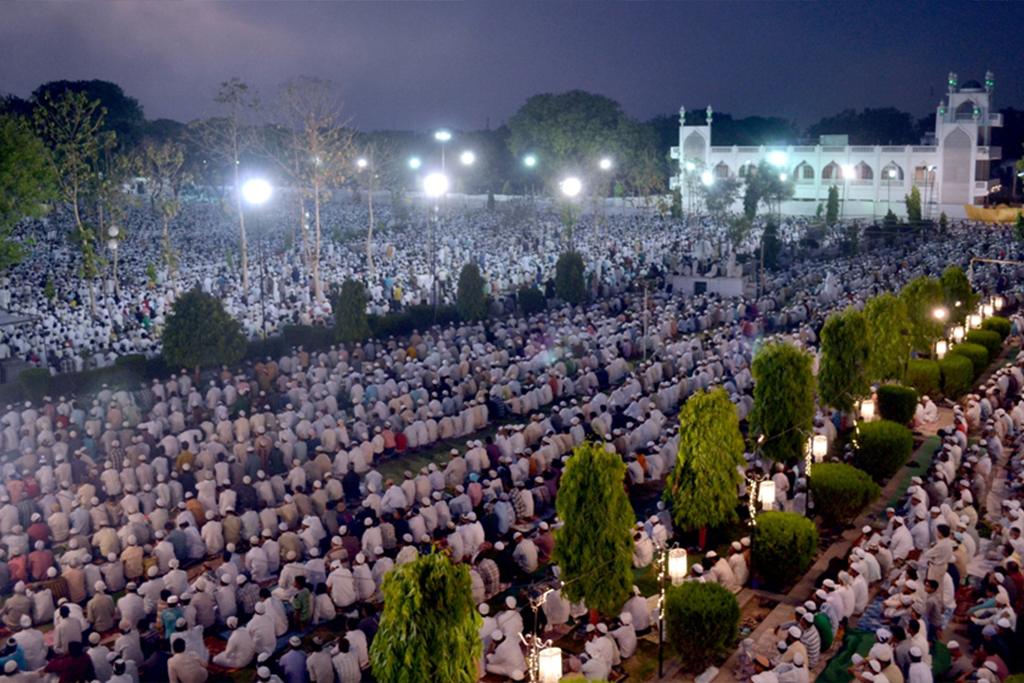 The Ulama-e-Farangi Mahal is the only family in the world to have produced Islamic Scholars consistently for the last about 1,000 years. These Islamic Scholars trace their lineage back as far as to the time of the Prophet (pbuh). The ancestors of Farangi Mahlis migrated to India in the 11th Century. The first evidence of the existence of the family lies in a revenue-free grant made to an ancestor Allam Hafiz in 1559. It is Emperor Akbar's first known 'farman' (edict). The Islamic Scholars of this family can be traced through similar documents down to the time in 1692 when the Allama's great-great grandson, Qutub-ud-din, was murdered at Sehali near Barabanki in the Indian state of Uttar Pradesh. Emperor Aurangzeb was highly influenced by the Islamic scholars of Farangi Mahal, so when he heard about the murder of Allama Qutub-ud-din Shaheed, he immediately ordered the family of Allama be shifted to a safer place in the city of Lucknow.
In 1695, the family shifted to the palace occupied by a French merchant, hence this Palace being famous by the name of 'Farangi Mahal'. This is how the family came to be known as Ulama-e-Farangi Mahal.

The Scholars became famous throughout the Islamic world when Allama Nizam-ud-din Farangi Mahliformulated a syllabus for the Islamic Madrasas. This syllabus was widely accepted by all the Ulamas of different sects and even after 300 years. This is followed with only certain changes in both the Deobandiand the Barelvi sects of Madrasas. Allama Nizam-ud-din became famous largely because of his Islamic knowledge and intelligence. Besides from across India, as many as 700 students from far-off countries such as Saudi Arabia, Egypt and China used to study at Farangi Mahal. In the light of this fact, Farangi Mahl can be regarded as the first madrasa of India, better known as Darul Uloom Nizamiya Farangi Mahal, regarding which famous witer and Islamic Scholar Allama Shibly Naumani wrote: "Farangi Mahal was the biggest Darul Uloom of India and is the founder of Dars-e-Nizami".

Allama also wrote a number of books on different topics.Maulana Abdul Bari Farangi Mahli (born on April 14, 1878) was another most famous Islamic scholar of India hailing from the Farangi Mahal. Not only did he play a very important role in the religious field but also in the Freedom Struggle of India. He was among the first to raise the slogan of Muslim-Hindu Unity in the country, as a result of which Mahatma Gandhi visited Farangi Mahal in March 1919 and stayed there.

The world witneesed Maulana Bari's political influence especially during 1919 and 1920. He also established a newspaper 'Akhuwat' to focus on Islamic issues. As a proof of his growing influence, he succeeded to win over Mahatma Gandhi, who came to stay in Farangi Mahal in March 1919, and got him interested in theKhilafat Movement. In September 1919, he held an All India Conference in Lucknow which led to the foundation of the All India Central Khilafat Committee. Maulana, along with the help of famous lawyer Chaudhari Khaliq-uz-Zaman, formulated the constitution. In November, at the Khilafat Conference at Delhi, he took the first step towards getting non-cooperation with the British adopted as a policy and began the process of cutting a public deal with Mahatma Gandhi. Maulana Abdul Bari also formed the Jamiat-ul-Ulama-e-Hind and he presided over the first session of Jamiat-ul Ulama at Amritsar. From February to June he devoted enormous effort first towards pursuading the Khilafat Committee to adopt non-cooperation as a policy and second at the Allahabad meeting in June to persuading the committee to accept Gandhi as chair of the group which was to put non-cooperation into action.

Maulana Abdul Bari devoted his energies to ensuring that there was a vast Muslim presence at the Calcutta special congress which enabled Mahatma Gandhi and their non-cooperation agenda to capture the organization of India nationalism.

His contribution to driving forward the strategy which led to the extraordinary outcome of that Congress, is demonstrated in his dynamic activity and in the hundreds of letters and telegrams in his private papers. He was also a graet teacher and a spiritual leader too, as he was the product of a family which had been responsible for India's greatest continuous family tradition of Islamic scholarship.These were some of the reasons because of which learned personalities such as Mohammad Ali Jauhar, Shukat Ali Jauhar, famous poet Akbar Allahabadi and the nawabs of Rampur, Jahangirabad, Hydrabad were highly impressed by him and also got very close to him. Maulana Farangi Mahli went for Haj three times and soon after returning from the third pilgrimage to Mecca and trips to Cairo and Baghdad in 1912, he founded the Anjuman-i-Khuddam-i-Kaaba. His ingenuity and intelligence can be judged from the fact that in spite of his involvement in political and social movements, he wrote about 110 books on various subjects such as Tafseer, Hadees, Fiqh, Usool-e-Fiqh,Faraiz, Tasawwuf, Adab, Kalaam, Mandiq, Hikmat, Ilm-e-Nahu, Ilm-e-sarf. So much in a short life span of only 44 years, the age at which he died on January 17, 1926.

Allamah Abdul Hai Farangi Mahli (Born in 1264 Hijri and died in 1304 /1886 ) was one of the illustrious literary figure of not only the Farangi Mahal but of the entire Islamic World. He was the most intelligent personality after Allama Bahrul Uloom. He died at the age of 39, before he could surpass the greatest Islamic scholars of all times Even in such a short span of time he wrote 120 books.

Maulana Khalid Rasheed was schooled in a Christian Missinary institute an after completing his education from there he secured admission to the famous Islamic University Darul Uloom Naadwatul Ulama for Islamic education. He has done His Master’s from Lucknow University.

Maulana’s major quality is that he is a person who has completed modern school education and they’re after attained Islamic education as a result of which he is able to lead the community with an open mind. He has contributed a number of articles in English and Urdu newspapers and his interviews are published regularly in all the leading newspapers and on National News channels.

He is the youngest Executive Member of the All India Muslim Personal Law Board.

His Biggest contribution is that he has established an Islamic Centre for India for educational and social services. In this center, number of welfare work is being done. He has restarted the historical Madarsa Nizamia, which has a very important place in the history of Islamic education as it was basically started by Hazrat Maulana Nizam-ud-din Firangi Mehli, who has formulated a syllabus for the madarsas’ which was accepted and introduced in all the madarsas of India and the sub continent. Here he is giving free education to the children in various subjects including English and computer.

He is associated actively with the mission of interfaith dialogue.

He is associated with a number of Islamic institution s and organizations.

His duties as the Imam of Eidgah are demanding , but from a very young age, Maulana Kahalid Rasheed has gone all out to promote an environment in which people of all faiths be friends each other and respect each other creed. He reaches out to all members of the society through Nobel endeavors like free health camps on the splendid premises of the Eidgah, where he leads millions of Muslim in the Eid prayers, he has exhorted a community od volunteer including the most renowned doctors to heal and help financially weak parents, regardless of their  religious background. The move has been widely appreciated and has helped people look at Muslims and their place of worship with respect, love and gratitude.

A time at which Islam and the Muslim community were facing the onslaught of harsh criticism, Maulana Khalid Rasheed founded the Islamic center of India to put off all the negativism and make people see Islam and its followers in a new light with love and respect. The  ICI made giant strides towards promoting health, education and social service simply as a duty prescribed by the religion and the prophet(PBUH). As time passed and ICI moved from strength to strength people from all walks and all faiths join the movement benefitting as well as contributing to the nobel cause of uniting manking.

Maulana Khalid Rasheed revived the tradition of top class education imparted by the scions of Firangi Mahal. Malana Nizamudin invented the syllabus followed by most Madarsas in the world, in caspulating the best of Islamic education in the easiest format. For long, the original site of tis invention languished for the lack of initiative, till Maulana Khalid Rasheed took up the cause. He founded the Madars-e- Nizamia and enrolled students from all social backgrounds for education that combined the Nizamia syllabus with the modern mainstream education to create citizen with a well-rounded perspective. Students at the Madarsa are doing very well and leave even foreign dignitaries impressed with their knowledge and conduct.

Maulana Khalid Rasheed has been the symbol of Muslim aspiration and a quintessence of leadership among the youth for his innovative gesture like the helpline that guides on phone about the dos and donts’ according to the Islamic Constitution, especially during the month of Ramazan, when along with prayers, people observe the fast. Similarly, his move of holding an Islamic fete went down very well among the community and society for the sheer awareness it disseminated about the religion and culture. Maulana Khalid Rasheed also lead Haj camps, which insures people leaving for the Pilgrimage to Mecca conduct themselves safely and in the most perfect manner.

Since Polio Virus was spread in India and hundreds and thousands of children were affected by this dreaded disease and 70% of the cases were reported from Muslim community, so on the request of the government official, Rotary International and UNICEF Maulana Kahlid Rasheed Firangi Mehli joint this movement and took a pledge to eradicate Polio.

He attended numbers of seminars, conferences, and rallies o this topic and lead the movement form the front, he came to know that their were a number of misconception regarding the Polio vaccination in the Muslim community.

Maulana Khalid Rasheed took a very bold step and gave Polio drops to his own on year old son Abdul Itai Rasheed  to send a very clear massages in the community, this act was very widely covered by the electronic and the Print Media. He also appealed during his Friday and Eid Seminars and speeches and also gave a number of Interviews.

Due to his Seminars effect now the Polio is completely eradicated from India for which he has been given a number of awards from Government, Rotary International and UNICEF.

Maulana Khalid Rasheed has given a number of fatwas to guide the community on the right path of humanity and peace. Among his most famous and highly appricated Fatwas are:

Want to see the world free from nuclear weapons, end of terrorism, end of communalism hatred and a war free world with peace and love for one and all and a honest, truthful, caring government through the world.

In 1993 a young scholar of Islam from Lucknow, India, Maulana Tariq Rasheed, brought with him to the Islamic Centre of Orlando an Asian perspective of the generous religion that takes into its purview the entire humanity and the whole world. Being a Hafiz of Qur’an and qualified in the tenets of religion, he instantly charmed all who visited the centre, whether followers of Islam or those simply curious about it.The rows of the devout offering namaz led by Maulana Tariq Rasheed have not stopped growing ever since he was appointed the Imam and one of the directors of the centre. His khutba (address) prior to the Juma (Friday) prayers gave all followers the peace of mind they had been hankering for and his advice on matters personal and public have made him the favourite of the community not only in Orlando, Florida, but across the United States of America.

Newsletter sign up
Proin enim velit, fermentum at malesuada in, ipsum... 16 days ago